Well that was vile, wasn’t it? Let’s accept that there’s little or nothing edifying I can say about Paris and associated issues and move on – except that I was watching Question Time last night and a few things struck me which I will share in passing:

Anyway, noone needs or wants this, so by way of light relief let me share with you a brief vignette from my life last weekend which may amuse. 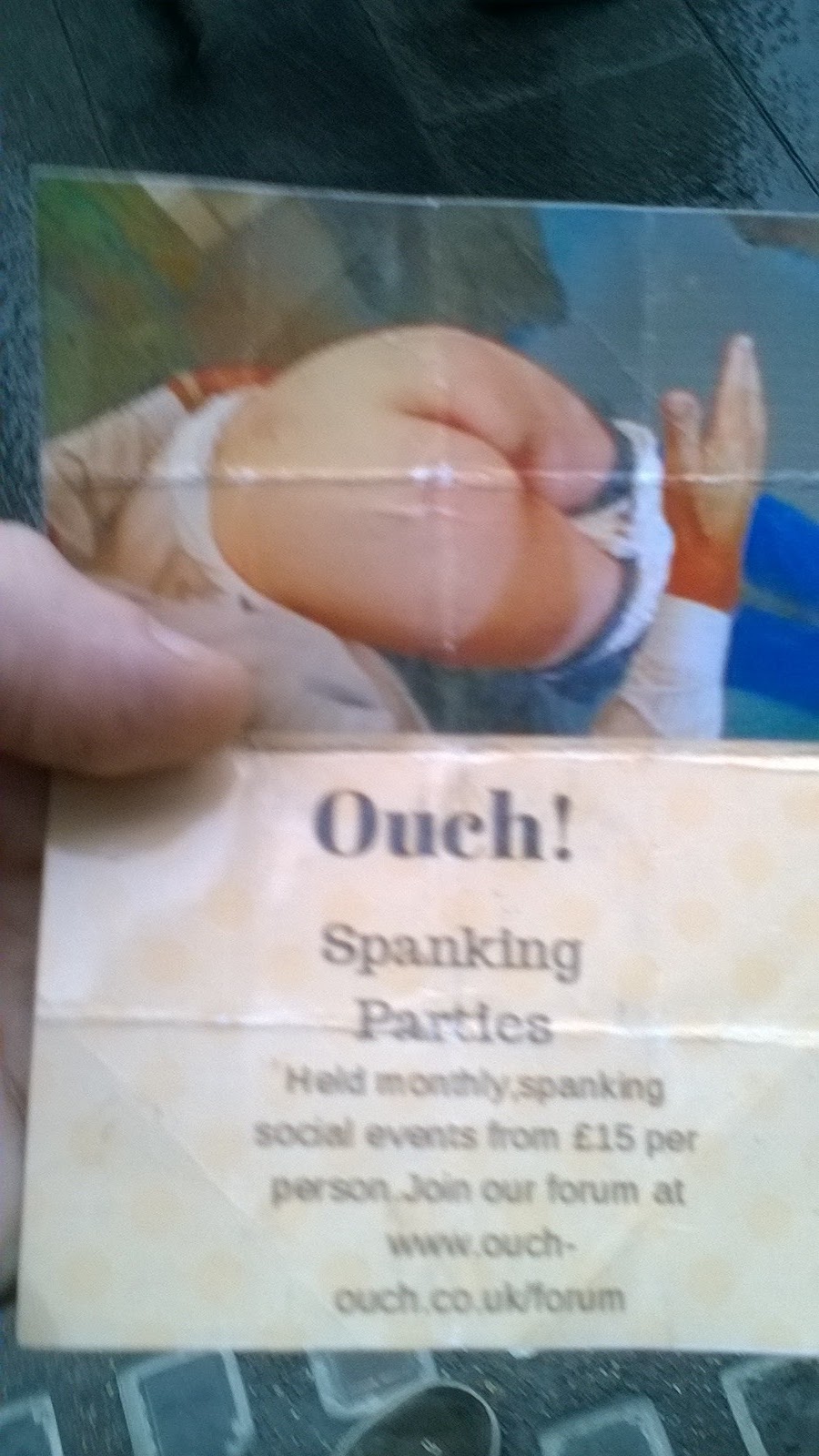 Odd, eh? I mean, I’m not into spanking (too much information, I know, but I feel it’s important to clarify these things at the outset), but it’s sort of curious, right? Even curioser – on the reverse were the name and bank details of one Ishmael Skyes, who I obviously Googled later that evening when drunk and discovered was the doyenne and coordinator of a certain London spanking and CP (Corporal Punishment, apparently, with a tendency towards school uniforms and very British discipline) community, which was holding a spanking party in South London that very Sunday, tickets to which were £20. Not only this, but the party was being held under the aegis of a certain insitution, active since the mid-80s, specialising in this sort of school-themed fetishism. The institution’s name?

You know when sometimes it just feels like the universe is speaking to you? I mean WHAT ARE THE CHANCES that I would find a flyer on the tube for some weird S&M fetish club based around a school of punishment and domination bearing my actual name? I have been properly weirded out by this all week, and have avoided speaking to my Dad in case there’s some sort of dark family history I’ve never been told about. Christ knows what the universe is saying, in any case. It’s probably telling me I need punishing, which is pretty accurate as it happens.

Anyway, that was something non-atrocity related which happened this week, and which I hope has somewhat lightened your mood in what has been, in no uncertain terms, a pig of a week. Without any further ado, let’s plunge headlong into the lost property cupboard of the internet – remember, you’re going to have to put SOMETHING on or you’re doing games in your pants. THIS IS WEB CURIOS!


LET’S KICK OFF WITH A MIX OF WHAT THE COMPIILER LIKES TO CALL SOVIET SPACE DISCO AND WHO AM I TO ARGUE?!

THE SECTION WHICH THINKS THAT IF YOUR RESPONSE TO LAST WEEKEND WAS TO GET UPSET ABOUT HOW PEOPLE WERE DEALING WITH LAST WEEKEND ON FACEBOOK, TWITTER OR ELSEWHERE YOU PROBABLY NEED TO RETHINK YOUR PRIORITIES:

LET’S KICK OFF THIS SECTION WITH SOME VERY GOOD ELECTRO INDEED COURTESY TSVI!

THE SECTION WHICH SEEMS SLIGHTLY LESS FULL OF FUN STUFF THIS WEEK, PERHAPS BECAUSE PEOPLE HAVE HAD OTHER THINGS ON THEIR MINDS, PT.1:

LET’S MOVE ONTO A FRANKLY BRILLIANT HIPHOP MIX SENT TO ME BY INTERNET ODDITY SADEAGLE – IT IS GREAT!

THE SECTION WHICH SEEMS SLIGHTLY LESS FULL OF FUN STUFF THIS WEEK, PERHAPS BECAUSE PEOPLE HAVE HAD OTHER THINGS ON THEIR MINDS, PT.2:

LAST UP IN MUSICAL TERMS, HERE’S A NICE MIX BY JUSTIN HAGAR OF ASSORTED HIPHOP BITS AND PIECES!

LONG THINGS WHICH ARE LONG:

AND NOW, MOVING PICTURES AND SOUNDS WHICH SUGGEST THAT SEEING AS EVERYONE WILL BE TALKING ABOUT IT ALL WEEKEND YOU WATCH THE (PLEASINGLY ODD) BOWIE SHORT TO ACCOMPANY HIS (ODDLY JAZZY) NEW SINGLE!

1) First up, a band called Earthly, with their track Glaze – all skittery electro and a lovely hand-drawn animation which is all movement and motorbikes and is quite reminiscent of Take on Me, which is obviously no bad thing:

2) Next up, the inevitable co-opting of the Deep Dream video phenomenon (see Curios passim for previous efforts by less famous artists) by a BIG BAND, in this case the peculiarly unloveable (to me at least) Years & Years, for their track ‘An Artificial Experience’. Can we declare this over now? Probably not until David Guetta’s had a go, sadly:

3) I am a sucker both for punk and for violent claymation, so this video, for Radkey’s song ‘Glore’, ticks a LOT of my personal boxes. If you like the gory work of Lee Hardcastle then you will LOVE this, though you will probably enjoy it even if you don’t. Even if you hate punk, it’s only two minutes long so give it a go:

4) Videos made on Kinect aren’t new – God knows I have featured enough of them here over the past few years – but this one, for Sissi Rada’s creepy track ‘Sunday’ (don’t know why,but I find it really unsettling) is an excellent example of the genre and features some pretty cool effects I’ve not seen before:

5) UK HIPHOP CORNER! Bit worthy, this, but the cause is a good one. Released by Rapman and SBTV to highlight awareness of suicides amongst young men, the track, called ‘Rollercoaster’, shows how things can go wrong quickly and simply and how people can often have noone to talk to and feel compelled to top themselves. So, you know, don’t top yourselves:

6) Meet internet sensation The Grindmother – a grandmother who sings grindcore. This song probably has a title, but it’s sort of immaterial – hear the SCREAMS!:

7) Years ago, back in the H+K days, I put a work by Vernibus in the pictures here; this is a video showing him at work on the posters of New York Fashion Week. I would give actual limbs to own one of these, they are GORGEOUS:

8) Last up this week, I love this song. It is tripphoppy and beautiful and the vocals are a tortured mess and I don’t understand how it only has 500-odd views. This is Seyr, with ‘A Love’. BYE! HAVE FUN! LET’S NOT THEM WIN, EH? BYE!:

Please forward this onto as many people as your mail server can physically handle. If you’re reading this and have yet to subscribe, visit the Imperica newsletter page to do so.
-->